Wheelchair did not define these people, why should it define you?

Sometimes we stuck into idea of people staring, talking first about our injury, asking if I you're ok or what has happened to you and my favorite...some people even talk over you like you'd be def (nothing against def people, but that would be a different story). Because of this I have learned to say "thank you not seeing me as a person" and the conversation can begin in the way or another. I have also learned if people sees the wheelchair at first, lets personalize the wheelchair fitting to my lifestyle, which forces people to open their eyes while watching. 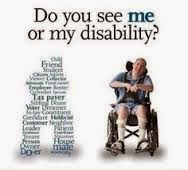 It is true we need to handle the life changing event in our minds and go through different phases of acceptance. After acceptance becomes the phase of living, the raise of self-esteem and strong will of independence. Unfortunately some of our friendships change, because we are not the only ones scared at first. The best advice for a friend would probably be "treat the person as you used to and breathe". Feeling sorry just will make everything worse.

There are some respectful famous people using a wheelchair, who has not let the disability to stop you from inventing, working, being active and at the end -doing something great. The common thing for these people is that if we think of them, we remember their accomplishments first and then the disability. Respect.

Stephen Hawking 1942 -
The greatest physicist since Einstein, who held the post of Lucasian Professor at Cambridge (the chair held by Isaac Newton in 1663). He has contributed the study that Einstein started and made many remarkable findings of black holes and quantum gravity. Stephen Hawkings advice for disable people: "My advice to other disabled people would be, concentrate on things your disability doesn't prevent you doing well, and don't regret the things it interferes with. Don't be disabled in spirit as well as physically."

Franklin D. Roosevelt 1882 - 1945
President of United States 1933 - 1945, who is constantly rated as one of U.S. top three presidents of all times among Abraham Lincoln and George Washington. Roosevelt is the only one elected for third term in presidential history and now it is not even possible according to constitution law. " The only thing we need to fear is fear itself", Roosevelt's speech on 1933.

Christopher Reeve 1952 - 2004
American actor, director and benefactor, who made his breakthrough as superman on 1978. Later he made a comeback to acting as a quadriplegic architect on 1998. He created the Christopher Reeve Foundation (currently known as the Christopher and Dana Reeve Foundation) to speed up research through funding, and to use grants to improve the quality of lives of people with disabilities. The Foundation has given more than $8,5 million in quality-of-life grants. His famous quote is about people's attitude: "Some people are walking around with full use of their bodies and they're more paralyzed than I am." Reeve told people to feel sorry for him first few years, but after he proved being active and alive, everything turned almost other way around.

Frida Kahlo 1907 - 1954
Mexican painter, who is best know for her self-portraits expressing pain, presence of death and the dark side of life. She used strong colors and was influenced by Mexican aboriginal culture with a hint of European realism, symbolism and surrealism. Her paints costs now millions of dollars and e.g. Madonna is a big fan of Kahlo and owns some of her paintings. Some of paintings exist now in Frida Kahlo's childhood home Caza Azui and they are borrowed to any other art shows. When she was hospitalized and her leg was amputated, she wrote in her diary: "Feet, what do I need them for, if I have wings to fly?" Kahlo continued painting in bed when she could and painting was a tremendous source of spiritual support for her.

Nick Vujicic 1982 -
A religious Australian motivational speaker, who suffered depression as a child but eventually came in terms with his disability. At the age of seventeen he started his own non-profit organization, Life without Limbs. In 2005 Vujicic was nominated for the Young Autralian of the Year Award and he has written that he keeps a pair of shoes in his closet due to his belief in miracles. Famous quote of Vujicic is: "The greater the struggle, the more glorious the triumph." Since the age of 19 Vujicic travels around the world sharing his story for millions, sometimes filling even stadiums to capacity. He speaks to students, teachers, young people, business professionals ans church congregations of all sizes and has accomplished more than most of the people on their life time.

I hope someone reads this blog writing and gets strength and power to reach towards interesting things in life. Stop fear the living itself.

Chasswheel smart wheelchair changed my relationship with my horse

An Austrian lady has been sitting in a wheelchair for ten years and she has a horse to take care of.

"I have horse, who is a dear old friend on mine. She has got used to me sitting down in a wheelchair and whenever I wanted to scratch her, she learned to bend her neck down to get closer to me. After many years I got the new Four X DL and went to scratch my horse. She was acting like a miracle had just happen! The first time I was able to scratch her by standing and she felt my hands on her back. It was a very touching moment to see my old horse pricking up her ears forward and looking happy for the long time. I still cannot ride my horse, but I can take care of her now independently and I am happy for it. The technical development gives me hope that maybe one day in the future anything is possible, even riding my dear horse." 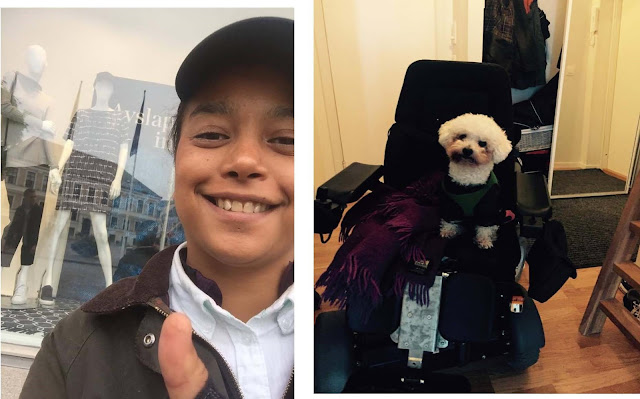 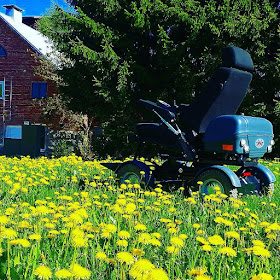